The Mamma On the Move story 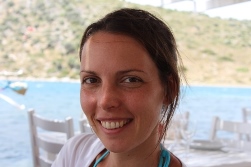 Mamma On the Move began during my first pregnancy. At the time I had to commute everyday on the train and most of the time I had to stand up because nobody would give up their seat. In part, this was probably due to some people intentionally pretending not to see my belly or “sleeping”, but it’s also true that it’s not always easy to say if a belly is round because of pregnancy or just a bit of “winter padding”! Added to this the fact that I’m quite a shy person and I would find it difficult to ask for a seat, so the result is that I would spend long trips standing up.

“I’m pregnant, please let me have a seat”.

Mamma On the Move t-shirts, bags and pins do exactly that. My designs are a direct, yet light-hearted and fun way to help expectant women to get a seat on public transport. And they work! During my second pregnancy, same job, same train line, and by carrying my Mamma On the Move I was almost guaranteed a seat every time.

However, Mamma On the Move designs do more than that, they also celebrate pregnancy. For instance, the Work in progress t-shirt also say “Look at my belly, I’m pregnant and I’m super excited!!”

That’s why often Mamma On the Move is a brand of choice when it comes to treats for yourself or presents for your expectant friends; it’s a fun way to celebrate one of the best times in a woman’s life. It’s also a life-saver on public transport and worth a thousand bouquets!

Mamma On the Move is still a small reality but we hope to keep on growing and spreading the message around the world that pregnant women need a seat on public transport!